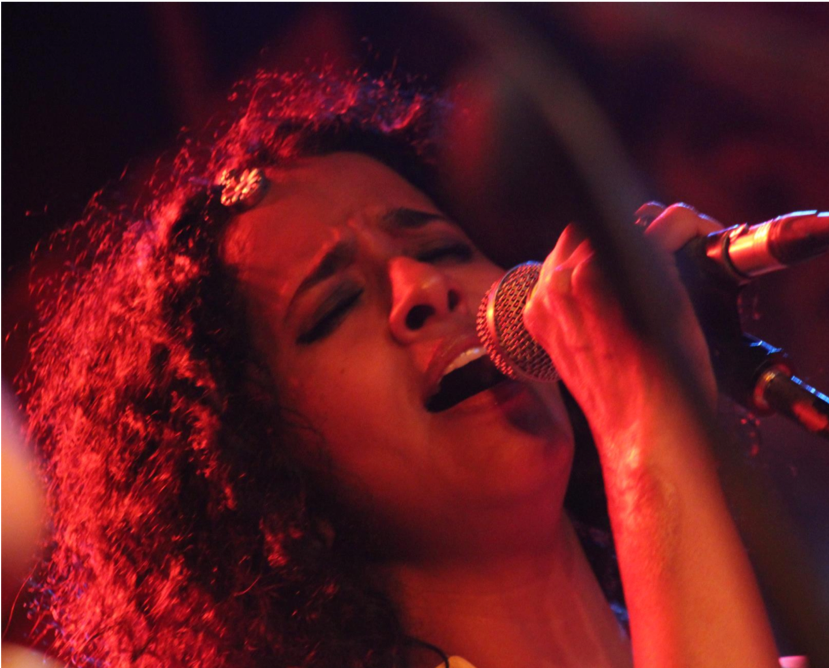 Ramdas Shenoyy in conversation with Ms. Hamsika Iyer a household name with hit numbers including Chammak Challo and many of other songs in multiple languages, her work in genres outside the films is as impressive. She has a never-ending list of ad jingles. Hamsika’s work with #JunoReactor (UK) of the #Matrix movie fame and the world-famous band #Prem Joshua which are both as unrelated to Bollywood as possible is inspiring.

What did you want to do in life as a schoolgirl?

My childhood has been amazing. I was more into sports, thanks to my two elder 2 brothers. Music runs in my family. My father, Late Shri S. Balachandran, an eminent musicologist, has been my foremost guru who taught me Carnatic music & light music. My parents noticed that my vocal range was suitable for even Hindustani music and thereby encouraged me to learn Hindustani music also from Smt. Vrinda Deshmane(Pt. Jasrajji’s disciple). But during school days, I have been an extremely shy & quiet child when it came to music. I was super excited doing sports. And slowly one day when my school friends discovered that I also sing, the matter went to the principal & from then on, I was sent for every inter-school competition. And I would come back with the trophy. At times I would also lose but that would not disappoint me as my parents would always say that participation mattered most.

How has the music industry evolved over the years?

Music industry has definitely evolved. One of the best things to have happened is that … Independent music has come a long way. Though Bollywood has the biggest audience,  independent music has also got a very good audience. And thanks to the reality shows , there is a plethora of talented and interesting voices who get a chance to make it big today.

How important is it to have formal training in singing for one to be a successful singer?

Being trained in classical music, I would like to say that the vocals get flexible because of the Riyaaz(practise)we do while learning. And it definitely helps in picking up the melody sooner. I am also a nautanki queen in the family because everyone at home are constantly pulling each other’s leg and full of drama….at times, that also helped me to get into the character of a song (haha haha haaaaaa). Bollywood singing is being the actor behind the screen… In the studio( she smiles) It is very exciting … You always get a chance to surprise yourself when you get to play very different character through your music.

How is playback singing different from lending voice to ad jingles?

Ad-film jingles are quite challenging. One has to be very sharp and talented to nail the work very fast as ad films are usually 30secs to 60secs . In that short time , everything has to be conveyed. The story, music and everything regarding the product you are working on. The ad films taught me a lot and I also got to meet amazing people and musicians. Film music is different. One gets to internalize the song and understand the character you are going to sing for. Though it is very important for a singer to be amazingly sharp, there is also a relaxed pace a singer gets to work.

What are the options for singers professionally?

There is YouTube (smiling again), Need I say more ?? (Hahhaaaaaahaaaaaa) we all know the digital portal has made life quite easy for the singers.

Today one sees a lot of live events and concerts happening. How challenging is it to be a live performer?

The live event industry has opened up many options for artists. The audience has also changed to a large extent. As I mentioned earlier, apart from the Bollywood music and the Indian classical music that already has a wide audience, independent music has found its audience too. I am very happy I get to enjoy both as I have my Bollywood band and I am also very proud of my world music band called ‘Rasayatra’ that I share with this fantastic music composer Kaushal Inamdar. Today if you want to stand out in the live music scenario, it is very important to be a great singer & performer. It is a major plus point to connect with the audience. It is an unexplainable high when I am on stage and experience the love I get from the audience when I perform. the energy you give through your singing multiplies when you see the crowd sing along and dance to your songs.

How is the international scene with respect to accepting Indian musicians?

Collaborations are something I always crave for… Like a hungry child (with her infectious smile). I have been fortunate to have worked with international bands …. Amazing electronic & psychedelic band  ‘Juno Reactor” who gave music for Hollywood film ‘Matrix’ and many more. I learned so much as a musician and as a human being when I toured with Juno reactor from 2012-2015. We performed at some of the most prestigious music festivals in Europe…. Ozora festival in Budapest, Boom festival in Portugal. Kubana festival in Russia, Antaris festival in Germany, Metsa festival in Finland. We also had a blast in Japan (Tokyo & Osaka) .. I collaborated with this amazing duo Andrew Mackay & Garry Hughes of  “Bombay dub orchestra ”  from UK.. very eclectic music :):)  I had the privilege of collaborating with this super talented guitarist  “amir john Haddad “who lives in Spain for his album “dos” and he roped me in for a collaboration with a kickass bass guitarist ‘Pepe Bao ” for the album ” Andebass”. I was fortunate to work with the wonderful “Prem Joshua” who I met in a few festivals in Europe. Recently I got a chance to collaborate with ‘Talvin Singh”, the very famous UK based Tabla exponent & percussionist, Asian underground music producer for the film  “Once again” … There is something brewing in the pipeline which will be out this year :):)

Your piece of advice to young aspirants (in music)?

As a celebrity, I would like to say … Dream big and embrace every obstacle with grace.

You have done B.A. in Economics. How has it helped you in your musical journey? Its relevance.

I am still in shock that I did B.A. in Economics …. It all starts and ends there … (with a smile)

What can music teach us in leading life and economics?

Music helps you earn through performances, workshops, and teaching to name a few :):)