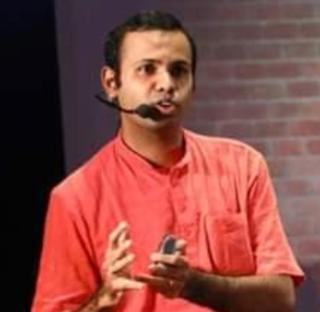 Ramdas Shenoyy from stirfrymba.com trying to understand the seriousness of comedy business and Carnatic music from Mr. Balls.

Stand-up comedian, Carnatic Music Fanatic, Digital Marketing Specialist — how would you describe yourself?

After completing my Engineering, I started my career as a marketer. I was an adjunct faculty at a University in Chennai in 2014 & 15, full-on enthusiasm to share my experiences and give tips on the difference between theory and practical knowledge.  I wanted to guide the students but realized that they sleep off during my classes. So, I resorted to humor as a novel way to engage with the audience. That met with some success, and I honed on my skills, and deliberately started doing comedy to improve on that. I got better not only as a teacher but discovered a hidden talent of being a comedian too.  In all this, was Carnatic Music — something I grew up listening to and was interested in, be it in tapes, CDs, net or direct concerts.  I happened to attend a concert that I rated as bad, and there came an idea of doing Carnatic Open Mics. Surprisingly that people did so many similar kinds of ideas in other fields, and nobody stole my idea….. Therefore I did it myself.

Can you share more details about the Carnatic Open mic?

Being a stand-up comedian, open mics are a way of life for me, I started Carnatic Network, a forum for Carnatic music enthusiasts, just for budding artists, to the city.  I built this as a stage that would be open to experimentation, learning, and mutual appreciation of the art. And that is how the idea of Carnatic Network popped.

Carnatic Mic serves as space where novice artistes could make mistakes, and still be encouraged. So in an open mic, artistes coming together for a friendly, democratic huddle, without the rules and restraints of a formal performance —be you an award-winning vocalist, who has trained for years, or a percussionist who has just started out, it doesn’t matter. All we ask is that your performance is purely Carnatic… Maintain the purity of the genre.

From a humble beginning with open -mics to rewarding the best picks from open-mics with recordings and concerts, Carnatic Network has grown into a bigger and inclusive community of budding artists today.

Comedian, Carnatic Enthusiast, and Cyber Marketing are all the 3 are very different –what is the connection?

The commonality to me is in Interest, Intent, and Insight: Those Interested have the Intent to explore further and gain Insight out of that.

What does it take to be a Stand-up comedian? Is Comedy really a serious business?

For full-timers, yes, but for those pursuing it more as a hobby, it is a side business. Being a Stand-up comedian requires a huge deal of emotional endurance. It’s like you don’t go to a doctor and jokingly say “oh wow, you’re a doctor? Awesome! Can you do piles operation for me?”.   But with comedians, people tend to do so, asking, “oh wow. Can you tell me some jokes?”.  I think the perspective isn’t set right.  There is a thin line between seeing someone as a “comedian” and being perceived as a “joker”.  I can confidently affirm that over 80% of the population doesn’t have that maturity. Further, with social media profiles, some comedians create, an illusory aura around, they think they literally own the world. That acceptance is actually a big deal for comics as they are more vulnerable.

Happiness Generation and Happiness professionals are going to play an important role in the future. What is your take?

One can take a philosophical approach to this question, but the fact that happiness is both a common noun and an abstract noun can become a verb or adjective too. But I will not get into the philosophy and look at this from a very demystified perspective.  We try and do a lot of stuff that we do, predominantly to seek happiness, if not now, down the line. Happy individuals will make anything in plural happy! Now I hope this sounds philosophical enough!

What is your advice to aspiring Stand-up comedians?

I wish people take me more seriously, so I am considered as a well established Stand-up Comedian. But few things, don’t steal jokes. Be original. Persist and just stay there.