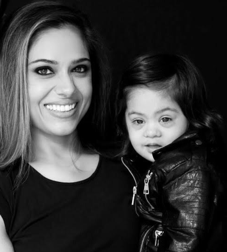 Learnings from life—Happiness is a choice! Pooja Khanna’s journey with her daughter Norah who has down syndrome.

Ramdas Shenoyy having a heartfelt conversation with Pooja Khanna about her daughter Norah, a special angel with Down Syndrome.

On how and what changed in Pooja’s life

Norah completely changed Pooja’s perspective on life. A lot of things became irrelevant, a lot of things that were irrelevant became very relevant. Earlier she would like to have things being perfect to the Tee. She wanted things to be done in a specific way but post-Norah’s birth all that was irrelevant. She started noticing small little things in life and pulled her out of her comfort zone. She now knows that she will not get help unless she asks for it. God created a mother because he cannot be there everywhere and the mother of a special child definitely has to be special.

As per Pooja, “Lot of walls broke down and suddenly I saw a different ray of light. People that I used to see as negative, suddenly were like ‘Oh, wow!’ These were the same people I never wanted to associate with and these are the same people who have shown so much positivity now. Probably I never saw that in the people. I started focusing on the good in the people because I was forced to see the positive in my child”. All this changed her attitude towards life and people.

De-mystify the myths around Down Syndrome

We as a society have a lot of assumptions on what we mean by normal. We look at things as an outsider and build our own perceptions. But, when you are in it and you live a day to day life, you start seeing it as your life is as normal as it is. It is not the end of life, it is the start of a different life. It would have happened anyway with the child.

As per Pooja, “My normal is my normal to me…for me down syndrome is my normal. Just a condition, my child is born with. I don’t want it to define her. It is something which she has”. You can see a sense of control over life, the way Pooja continues her conversation. “Lot of people have a lot of conditions, somebody has spectacles, somebody has diabetes, but that’s not the end of it, but you look past that condition because there is normalcy created around that condition. Just because there is no normalcy created around Down Syndrome, people look at it with a different perspective. I have created normalcy with the people surrounding me, I don’t see it …I see it as irrelevant as somebody having spectacles”.

Down syndrome is a genetic disorder caused when abnormal cell division results in an extra full or partial copy of chromosome 21. This extra genetic material causes the developmental changes and physical features of Down syndrome.

Pooja is clear on, what do you do when you are given something extra, you make the most of it…focusing on the self rather than the limitation.

As per Pooja, today’s children when they grow up in an inclusive environment, they need not be taught about inclusion. So as an adult, they don’t see things as different. They don’t see the difference….or why someone is going on and on about it. It is so much normal and natural.

The other aspect It teaches is empathy. Pooja has learned a lot of empathy from being around Norah. She has learned to empathize with people who are different but with everybody else who may be in a different situation or maybe going through a hard time because it also opens up…it makes you more empathetic while seeing people. “Your judgment factor goes down and that is what is happening with me” is what Pooja feels.

Advice to parents …how they can enjoy the journey of life

As per Pooja, “ This is the beginning. When I had not accepted it, I looked at everyone looking at me differently, but it was not everyone looking at me differently, it was me looking at my child differently. As soon as I accepted the situation, and I changed the way I saw it and I changed the way I perceived it, the entire environment around me, and my child. I see things the way they are and I start accepting it, then everyone around me has accepted it because I have accepted it and my outlook has changed. The moment you change your thinking, automatically things change. People are not there to really out to get you. They are as clueless as you were. They don’t want to discriminate but they do not know how to approach the situation. We have also learned over time. They didn’t see it before the way you didn’t see it before.

The community to help others—More on real support groups

As a community, we need to talk about it more openly. Pooja has friends with special children who do not want to discuss the subject…somewhere they are ashamed of the situation. When you come from that mentality and you think like that, it is difficult to change the situation.

She felt the need to create a community, principally driven by the need to share and seek information. It is important to let people know that they are not alone. “We are so many and we are speaking about it. We are not only helping others but we are helping ourselves and that is where I started talking about it. I created a community on social media and tried to reach out to people internationally because there were hardly any people who I could reach out to”, Pooja added.

She reaches to international parents, looking at their lives because they were talking openly about it. Then, she started writing about it and it reached out to someone who would like to reach out to her. “I have basically put my life out there so that somebody could help me. If I was doing something wrong, reach out to me and I realized that there were so many patents that reached back. I think it is all in our head, of what will people think, what you should ask”.

Pooja says, that there are no stupid questions on what you can ask…any question is a good question. No one is going to judge. The Only Way to learn is curiosity. So when we start reaching to more people, we also get help and probably helping someone else as well. We are supporting parents and not only kids, as we need a community for ourselves. It is important to stay strong and get a break and go out. It also helps to relate to someone who is at the same level as you are in the same boat. You are actually leading a similar life may be at different stages of life, somebody ahead…because of that there is more inclusion. You feel that you belong to other communities as well. Find your community, find people who can relate, then there will be people from outside the community to reach out. I generally talk about it, and we share resources and reach out. I have reached out to a few organizations to help. Also, there are not who can have access to therapies required, the subsidized therapies. India at least in metro cities has the support system, Pooja has been able to help many parents in this journey, she cites about a lady in Bengaluru where she could help her in connecting with therapy centers for her in the required location…automatically people are connecting each other.