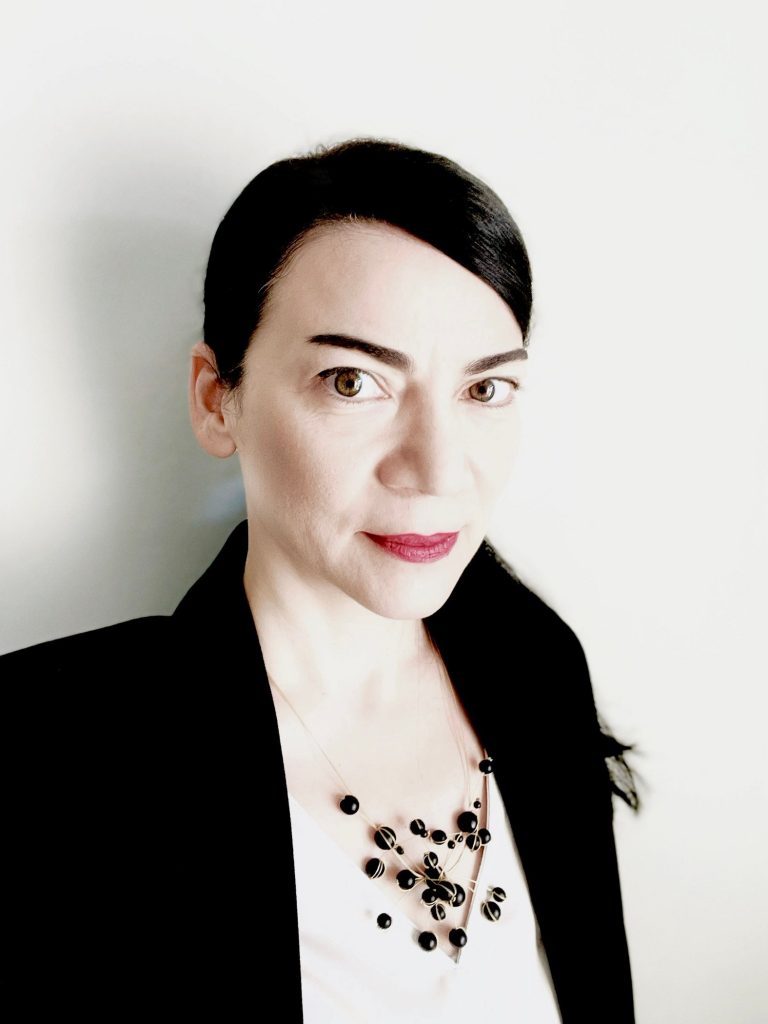 MEDinART with Vasia Hatzi from Greece.

Ramdas Shenoy in conversation with Vasia Hatzi, PhD Geneticists and creator of the global platform MEDinARΤ, on the social impact of medicine-inspired art in the pre- and post-pandemic era.

How and when did you decide to collide medicine with art?

In biological sciences, as in art, the Image plays an important role. However, the scientific language primarily demands a logical interpretation of the biological images. Willing to approach the biological structures primarily aesthetically and philosophically, I introduced in 2012 the “LaB. – bio-conceptual creations” (www.La-B.gr), a series of jewelleries inspired by the images of the biological microcosm. Through LaB. the images of the biological microcosm are elevated into universal symbols. LaB. creations is an awarded project that has been presented in international medical art exhibitions around Europe and the USA. At that time, I started feeling connected with other bio-inspired artists. However, despite the increased number of medicine-inspired artists, there was a lack of an accessible art-platform that would link these artists in a wider context of an art-science community, and would explore the interface between biomedical sciences and arts. From this necessity MEDinART was born.

What is MΕDinART all about?

MEDinART (www.MEDinART.eu) is a global and continuously growing platform that links biomedical sciences with arts and explores the interface between the two fields through the work of more than 180 artists from 30 countries, who are inspired by aspects of biomedical sciences. MEDinARΤ vision is to unite the biomedical-inspired artists, scientists and society through the universal language of SciArt, to explore the mutually beneficial relationship of biomedical sciences with arts, and to globalise the biomedicine-inspired art movement. The artists of MEDinARΤ engage with the medicine’s history, material and visual languages, and political ideologies. Influenced by images, concepts, discoveries and technologies of the medical sciences, the artists of MEDinARΤ pose profound questions about the complexity of human body, its abilities and limitations, and invite the audience to perceive the biological universe beyond the senses. They raise profound questions about the purpose and role of the science in the society; present different ways of looking at research outcomes, highlight ethical issues of scientific practices and conceptualize the biomedical world. MEDinARΤ integrates all the individual views of artists in a wider context of thinking, that exceeds the spatial and temporal constrains that every individual artist inevitably encounters; just like in nature, where every complex living organism is considered evolutionary superior from the individual cells of its composition. In the MEDinARΤ world, artists, bio-scientists and technologists work together, to invent a common language of communication and to deliver to the society the message that art and science should not be perceived as distant disciplines but as interconnected manifestations of the human creative mind.

How has the audience received MΕDinART? How has been the response?

MEDinART was launched at the main stage of TEDMEDLive Athens 2013. Τhe audience has been engaged from the very beginning. Medicine-inspired artists embraced this idea and today MEDinARΤ features more than 1500 artworks from 180 artists around the globe. The response from the medical community was overwhelming. The last years, even in the frame of COVID pandemic, I had the honor to be an invited speaker in the opening ceremony of international medical conferences of cardiology, dermatology, ophthalmology, and anatomy as well as in online science festivals, to talk about the social role of biomedicine-influenced art, each time from the perspective of the referred field. Until today, MEDinARΤ has been presented through exhibitions, talks and video projections in 32 SciArt events, festivals and international conferences in Greece, Denmark, Belgium, Latvia, Spain, Kazakhstan as well as Saint Louis and Atlanta, USA. Collaborations with more than 50 governmental and non-governmental bodies have been achieved. More than 18.000 website visitors during 2020, have reached the website and the social media (mainly from the UK and USA), and magazines, the press and TV shows have invited MEDinARΤ in their premises. All these responses echo the indomitable desire of society to re-think collaboratively; and it seems that MEDinARΤ inspires and motivates towards this direction.

What is the market of MΕDinART?

MEDinART contributes in the rapidly developing field of the humanities in healthcare through exhibitions, articles and invited talks in organisations and educational institutions around the globe. It connects individual biomedicine-influenced artists, providing them opportunities for publicity and new collaborations. It motivates scientists to embody art subjects in the scientific practice and way of thinking. It also educates the general public by bringing the scientific issues into public discussion. MEDinARΤ is an independent, free and self-funded project that has acquired a global profile, beyond financial transactions. It primarily delivers ideas, and its goal is to inspire and motivate. Let’s consider it more like a Manifesto, perceived by the senses; a conceptual destination where the anachronistic dichotomy between sciences and humanities is abrogated, and art, sciences and technology are perceived as different avatars of human creativity. From this perspective, the intellectual recipients of ΜΕDinARΤ are the biomedicine-inspired artists, the vigorous scientists, the premises of medical museums and the medical industry, and all the creative minds of the general public.

You see yourself as an artist or a Biologist?

My academic path has been oriented toward biological sciences, and therefore, the major stimuli and frameworks of knowledge arise from science. However, art has always been my second nature. So, outside the scientific laboratory, I explore the intersection of biomedical sciences with arts through various sci-art activities. I cannot consider myself as an artist, but rather as a “hybrid scientist”. I just can’t neglect my passion for art, even in the most scientific part of me.

As a biologist you would have seen the COVID pandemic very closely, how has it changed your interpretation of life?

The pandemic is a transition point. It triggers us to rethink the ways in which we can co-exist with each other, and with life forms radically different from our species. It forces us to (re)consider about the commonalities that all human share with one another despite any borders that exist between us. The increased solitude due to physical distancing, gave the opportunity for self-reflection and renewal. The pandemic has changed the collective mind about the impact of viruses and microorganisms on life history. The invisible viruses that have survived through genetic and evolutionary simplicity dominate the most complex species on the planet earth! The pandemic has domesticated artificial intelligence and cyber-symbiosis. It becomes, therefore, apparent that the human is called to adapt with three new forms of symbiosis; with other humans, with the virus and with the machines. The adaptation process into the new pandemic symbiotic realities urge to reconsider the way we perceive the living human body, the virus, the machines, and the world around us, and to invent new strategies of resilience. This process presupposes an interdisciplinary way of thinking, where all the human achievements are activated: the arts, the sciences, and the technologies. I strongly believe that medicine-inspired art can have a great impact in the evolutionary adaptation during pandemic. From this perspective, the pandemic era questions the traditional disciplinary divisions between art and science.

What do we learn from the art practices influenced by biomedical science? Can microbiology-inspired art be beneficial to adapt more effectively in the pandemic reality?

Like the great fears that occupy the collective unconscious, microorganisms and viruses, stimulate artistic creation. Microbiology-inspired artworks, also featured in the MEDinARΤ platform, examine the invisible beauty of microbial life and familiarize the recipient with the unseen microorganisms; and decode the fears and anxieties of society about microbial diseases, exteriorizing the fear of the unknown. The microbiology-inspired artists explore the role of medicinal drugs in prevention and treatment of infectious diseases and raise awareness on the consequences of the antibiotics use, antibiotic resistance crisis and vaccination. The artists engage and collaborate with patients, physicians and the general public and discuss key medical issues from the position of the patients that can potentially improve the diagnostic and therapeutic skills of the medical students, contributing in the evolution of the medical profession. Beyond biology, artists collaborate with medical scientists and engineers to create robots and cyborgs, explore the boundaries between living organisms and machines, provide new possibilities of life and reshape our reality. Art triggers us to reconsider our relationship with microorganisms and the machines and to accept the human body not as a unitary entity but as a dynamic symbiotic planet of creatures with different evolutionary strategies, broadening our perception about the human body possibilities, limitations and identity. Art influenced by biomedical sciences can create the path to adapt more effectively in this new normality of symbiosis between human, microorganism and the machines, contributing in the post-pandemic social recovery. This is actually the subject of my current sci-art research activity!

Your inspiration and idols in life?

Deeply inspired by the complexity of the biological systems, the magnificence of the forests, and the infinite potential of the human mind. Idols are the nonconformists, the healers, the creators, the magicians, and the lovers, of all kinds.

Vasia Hatzi (BSc, MSc, PhD) is a biologist, currently working in Benaki Phytopathological Institute, Greece. For her scientific work, she has been nominated with 2 scholarships and 5 awards. She is co-author of 41 peer reviewed publications and book chapters, more than 70 presentations and abstracts in European and International Conferences, translator of 1 book of genetics, participator in 14 scientific grants and reviewer in 12 International journals. She is the creator of LaB. Bio-conceptual Creations (www.La-B.gr), and the global art network MEDinART  (www.MEDinART.eu).

During 2019 she has been nominated by SciCo with the award of “Science Communication through the Arts”, ΕΠΙ2 award.