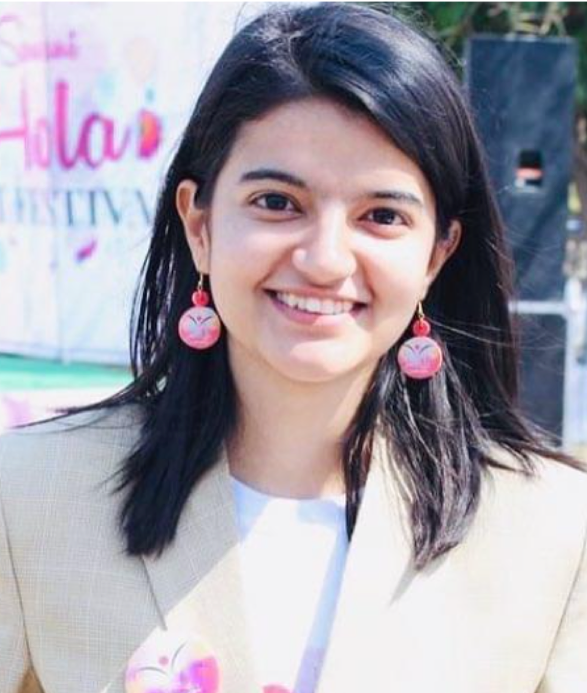 Ramdas Shenoyy from StirfryMBA.com connects with Ms Drishti on social entrepreneurship and challenges.

Sarvani is an all-girls organisation founded by Drishti Kharbanda, to provide a platform which is easily accessible to all and create a medium between men and women who can inspire each other with their unique yet similar stories.

Sarvani is all women run organization from Chandigarh. It started differently. There was no concrete idea. She was in the 2nd year at MCM DAV college Chandigarh, an all -girls college. Drishti was about 19 years old. The idea was to connect women who think same way, who have same ideas and then come together and work something out. There was no complete plan or layout that she had her in her mind. It started with a WhatsApp group. What she did was she spoke to random girls in her college and suggested to them to come together and brainstorm on ideas and can do something with a belief with a clear solution centric approach rather than having discussions on different topics. The idea was to create such a platform to arrive at a solution in which they believe in. What started as a dialogue moved to ground as well. People around her thought of converting the moment into an organization. They were doing something which an NGO was doing and working for a society, so they formed the organization. It was an idea to connect with women and now it has evolved with her as an individual and the experiences they had. Now, Sarvani has become umbrella for many initiatives. What started as a dialogue in society – women rights, LGBT community, children, sexual abuse or any societal issue that they believed that needs to be talked about is now hard-on implementation arising out of that dialogue. They now have Sarvani talks where people from ordinary walks of life with extra ordinary stories. They have Sarvani Saamvaad, where they do various programs and many activities like 100 smiles a day, peace for tomorrow campaign, where they are giving back to the society. The motto of Sarvani is inspire, educate and empower. The journey is multi-dimensional, where they are working for environment, working for children, working for women. The idea is to give an opportunity what every girl deserves. “When you give a woman an opportunity this is how they give back”, says Drishti. “The way democracy is by the people, of the people, for the people, similarly Sarvani is by women, of women for the society. These are young girls working for societal welfare”, adds Ms Kharbanda.

Vision of Sarvani is to provide employment. They have already started a project of ‘women made craft’ and they are working with women from different sections of the community. They are creating market for them, designing products for them and they are working at ground level to actually find them employment. Sarvani means complete.. Sarvani is one of the 108 names of Goddess Durga and they believe that you give an opportunity, empower but financial freedom and financial independence to any individual makes them complete. So, the vision is to create and give employment to women.

The broader vision is to create a society which accepts and open to new ideas. They create workshops and drive and dialogue on child sexual abuse and LGBT community, menstrual health. These are topics which are still taboo in conversation and even a little change can create an impact, which is what they are looking at. Even a little change can make a difference is what she believes in.

Their focus and achievements

Sarvani is the umbrella brand and they have divided the community and the organization and they work for different causes, first being women, second being children. They also work with LGBT community to a certain extent and another being environment. With children they do workshops like ‘Good touch Bad Touch workshops’ with elder students they have sessions on menstrual hygiene mostly in Chandigarh. The other focus is environment. With women they create a dialogue and discourse and the role that women can play in society and the Women made craft is one of its kind startup for creating employment. With environment the run a campaign called ‘Trees for Tomorrow’ where they are creating awareness of planting trees. On the achievements, Dhristi says, “I have been very blessed and encouraged by national media agencies. Very recently we were featured by #RepublicTV” which has been a great opportunity for us”. They have also been featured by #ZeeNetwork and invited by their platforms. Ms Kharbanda adds, “ I wont call it achievement, I would call it encouragement”.

Advice to people who want to create social impact

Dhristi says,“If you want to do what you really want to do, ensure that you are genuine about it and passionate about it”. You are not there for limelight and which for personal experience I would like to share . When we started Sarvani, there were no interviews, there was no Republic TV coming or someone featuring us. There was no invitation or people calling you for webinars. There was no collaboration happening. There were no praises and people were not encouraging. So, if you are thinking and going for it and think that in the end I will get encouragement and recognition then don’t do it.

“If you want to create social impact whatever you do in the society really feel for it otherwise it will be very draining and you will lose out, because when you are going out in the journey it is alone and not many have explored. Don’t think about it being a big change or small change…don’t think about the magnitude of it. Think about what you feel about it as ultimately what matters is what you think about it and how you feel about it because there will be instances where you get disheartened and you wont get encouragement. Nobody will come and tell you that keep doing it. You will be telling yourself that what I am doing is worth my time. It is worth the efforts and something which needs to be done. So believe in yourself and do it..what you feel is right and do it with complete honesty” she added.

Who is your idol and how do you look at a problem?

How does she look at the problem: She started her journey at a very young age as a teenager with no clue of the real world. She was not a social animal with many friends. When Sarvani came to her life it was just an exposure. There was something in her which was driving her. Her family was against it as they didn’t have any political links nor a social activist and saw it as waste of time during her formative years of career build up. For her father it was very difficult to look at an eighteen year old running here and there and had no clue of what she was doing and wanted her to focus on her studies and build herself up. It was really a difficult start with no finances, no support, and every day it was a struggle. She didn’t have a co-founder to discuss and say that “we will handle this …we will deal with this”. She says, “Whatever I am today is because of the problems. When, I look at a problem, I look at the possibility of learning from that problem”. Every problem made her a better person. Today many people come and congratulate her for her work but believes that she doesn’t learn from the good talks, but it is always criticism and problems and circumstances that made her learn and what she is today. When she looks at a problem, she sees the possibility of she learning from it and coming out as a better version of herself. “When you look at a problem you should look at a possibility of a solution. Without a problem, you wont go and find a solution” she adds.

With Sarvani for everything they needed financial support, even if it is a meagre amount of Rs 2000-3000 which she didn’t have it when she started. So it started from how can you get that money . It is the problem that made actually worth it.

At Sarvani, she has evolved with the organization and all of 21, challenges with time they also have evolved and the way she has tackled have also evolved. “In every part of your life they are different and how you address them is also different,” says Ms. Kharbanda. When she started she had no clue about dealing with people. People would come to her seeing her as a young girl with an organization and would want to take advantage of her position. With time challenges have evolved and the way she addresses them is also different. She questions the challenge and asks herself whether she can do it? “Can I do it what it is expecting me to do?” is what Drishti asks. She doesn’t get discouraged anymore. Now she takes challenges in her stride and doesn’t allow anything to come between her and the solution to those challenges. “You learn, you experience and then you come out of it and then you have another challenge facing you” she concludes.